Barrington Anthony Biggs was born in St. Andrews, Jamaica.  In his early years Barry trained for and became a recording engineer and cameraman with the Jamaican Broadcasting Company before entering the music scene as a performer. He joined the band “Astronauts” that enjoyed local notoriety before accepting a position as the lead singer for Byron Lee and the Dragonaires, the premier dance band in Jamaica at that time.  It was at Lee's Dynamic Sounds studio that Barry recorded his first Jamaican hit, a cover of the Osmonds’ 'One Bad Apple'.

Barry shot to International success in 1976 with 'Work All Day' which had been recorded six years earlier.  He had six hits in the UK Singles Chart between 1976 and 1981, the most successful of these 'Sideshow' which peaked at number 3 in December 1976, selling a million and half copies in Europe.  He recorded two songs with Bunny Lee 'Sincerely' and 'You're welcome' which were both received very well in the Caribbean and Europe.  More chart success came when he topped the Reggae chart in the UK with 'Wide Awake in a Dream' and 'A Promise is a Comfort to a Fool', these proved so successful that they gained British National chart positions. Barry's musical output has been consistent and well received, making several top-selling albums such as 'So in Love', which was voted UK's best reggae albums of the year.

Many of Barry's recordings are reggae cover versions of popular soul hits, including songs such as Stevie Wonder's 'My Cherie Amour', The Moonglows 'Sincerely', The Temptations 'Just My Imagination', and The Chi-Lites 'Have You Seen Her', giving them a light reggae feel in a MOR style.  Unlike many of his contemporaries, he avoided the political and Rasta themes then popular in Jamaica.  Barry instinctively understood his audience and continually delivered well-produced pop songs, adding just enough Jamaican DNA to keep them fresh and bright.

Barry appeared on television in France, Germany, Holland, Luxembourg, and on BBC's prestigious show 'Top of the Pops'.  These appearances led to a huge sell out tour of Europe and the US.

A solid entertainer, appealing to all ages and both sexes, he has been called the Barry White of reggae.  Barry Biggs is unlike any other singer in reggae's history.  A writer for the Rolling Stones magazine once wrote "when Barry Biggs sings, women swoon and then fall in love". 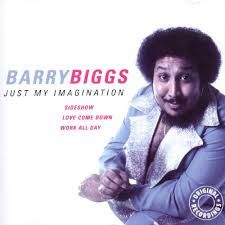